I feel a little like the diligent student, who watches the teacher and absorbs the lessons, but at test time has a brain freeze. I hope that what I say today is worthy of her contribution to my life and that you’re sympathetic graders.

When I think of Grandma, the first things that come to my mind are her love of sports and her laughter. She watched sports and talked about them constantly. In younger days, she was an all-around athlete. She was always in touch with her favorite teams, telling stories about going to watch the high school football or basketball games. Ask her how the Cubs were doing and not only could she tell you, but she could tell you why. Although looking back on it, her saying, “they can’t hit and the pitching stinks” wasn’t really that remarkable, for it seemed to always be true. Regardless of their record, she always knew and she always watched and she loved the Chicago Cubs.

When I was a young boy and we’d play baseball in the back yard, she would infuriate me by running around the bases carrying the bat. She knew that it got to me. I’d get mad and she’d laugh. She loved sticking that needle in. She tried to teach me that stupid little skip that she used to start her bowling approach, but I wouldn’t have it. It was her thing and it worked magically for her.

I loved the smell of her kitchen when she was making fried chicken whether it was for a family reunion in Algonquin or before fireworks at Walkup’s Woods. She made this rice pudding concoction that she would bring to us in a container the size of a mixing bowl, that I would eat in one sitting. I’m not sure my sister ever knew what it tasted like, because when it was in the house, it was mine and it was gone quickly. Such are my childhood souvenirs.

I’ve always used Grandma’s life as a measuring stick of history. She was nearly 6 years old before women got the right to vote. At age 10 she heard a new song by George Gershwin, “Rhapsody in Blue.” Just 15 when the depression started, she was 30 on VJ Day. She was here when they put in the Crystal Lake Black Top. They called it “THE black top”, as if that description alone was enough to distinguish it from all the other roads in town. She was 55 when men first walked on the moon. From dirt roads and horseback to the moon, she was witness to a remarkable century and accelerating change.

She was a constant presence in my life. Sunday dinners, vacations, ball games, banging pots at the stroke of 12 on New Year’s, at tennis tournaments where her nervousness and enthusiasm were so noticeable that it distracted the players. The green ’67 Ford Galaxy and later the red ’76 Chevy Nova in our driveway, she was the Fifth Beatle of our family.

But it shouldn’t have been that way. Robbed of the love of her life by the time she was as old as I am now, she lived half of her life as a widow. It’s common for people to say nice things about someone who has died, but throughout my life, whenever I’ve encountered someone who knew my grandfather, there’s a sense of genuineness sometimes bordering on awe in their descriptions of him as a great man, a great father, a gift to the community, that it’s hard to believe they’re just being nice. I wish I could have known him.

Letters to 116 McHenry Avenue were to be addressed to “Mrs. A. R. Jurs.” It may have served other purposes, but to me it was a lasting tribute to the man she loved and a small way to keep his memory alive for a kid like me. Trips around Crystal Lake were frequently filled with sentences that started, “That’s where your Grandpa…” Even as I wrote this, the mention of Walkup’s Woods a minute ago sent my mind to, “That’s where Grandpa played baseball.”

To try to fill the unfillable void, she had a collection of live-in student teachers, the folks at the butcher shop and the card store and other places and of course, countless friends. She was, to me, the greatest pinochle player ever, and she was frequently off to some floating card game somewhere in town.

Going to her house in the summer often meant “Adventures in Hedge Trimming” with my father. My mom and Grandma would make the mistake of leaving the project unguarded. My memory of it, perhaps distorted by time and my sense of comedy, was that we ended up with more branches on the ground than remained on the bushes. Think Edward Scissorhands meets Sweeney Todd. Upon their return, all I remember Dad saying was, “Once I got started….” and “Ya gotta even it out!” ‘Twas ever thus. To her credit, I think Grandma appreciated the effort and the fact that the job wouldn’t have to be done again for another decade.

It’s fitting that we gather here at Immanuel, a place that was a big part of her life and meant so much to her. Though the events of her life sometimes challenged her faith, it was a continual source of comfort and strength for her. This beautiful church and its family meant so much to her and carried her so far. All through her life, she accumulated so many friends, some of whom are gathered here today, and we are thankful for that.

I’ll add a note of gratitude to my mother, who cared for her so diligently over these last few years. It wasn’t easy for either of them. But Mom, you made her life better than it otherwise would have been, and for that we are all grateful. Your effort stands as a testament of your love and devotion not only to your mother, but to your father. Thank you for doing that.

You often hear people who have lost a loved one ask for “just one more day” with their departed. But for Grandma, as the years wore on, I’ve thought that it became “one more day before she could be with Al and her Lord.”  That day has finally come. They are reunited at last, and for that I am happy.

At the end, there was no unfinished business. She was fully prepared, and she finally got what she’d wanted for so long.

So as Paul wrote, we should not lose heart. Though her outer self wasted away, her inner self was renewed every day by her faith, which prepared her for the eternal weight of glory.

She was radiant, and will always be so in our memories.

May she finally rest. 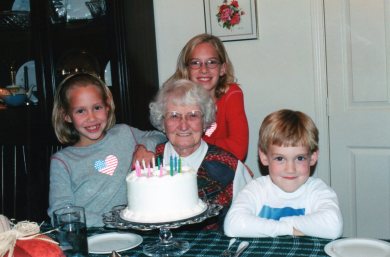 This entry was posted on Sunday, March 16th, 2014 at 3:45 PM and is filed under Uncategorized. You can follow any responses to this entry through the RSS 2.0 feed. You can leave a response, or trackback from your own site.