Fade to Black; The End (?) of the Great Facebook Experiment

Having recently been accused on my Facebook page of not caring about the shooting of a police officer, I think I’ve reached the end of the road on the site.

I don’t think I have the energy to sustain the level of outrage required by the times, while at the same time fighting those who think that the threats are made up or exaggerated. I’ll just say this: It must be quite comforting for some to think that their team will never find themselves in the crosshairs of these groups. I think when one American is attacked or threatened, we are all at risk.

I don’t want to be *that guy,* the one whose only song is the Alarm Bell of Justice, clanging incessantly about the outrage of the day. My heroes, Churchill and Orwell, aren’t pleased with me tonight. I’ll have to live with that.

I have always worked at balancing a strong viewpoint on the day’s issues with the other things that I find entertaining and that make my life whole. (Sadly for some, none of this involves cats, so much of the internet is useless to me.) Finding things that make me laugh has always been my life’s work. Bringing others along on that ride has been an added bonus.

At the same time, I know I can’t ignore what’s happening around me and blithely post only about distractions. It’s increasingly hard for me to figure out how to fit these pieces together and to use this space in a way that is meaningful to me (i.e., to amuse myself and perhaps you; to enlighten the discussion and to perhaps prod you to think about something you’ve not yet considered) without falling into either trap (perhaps I already have). I don’t want to set people up to be hectored, nor do I want to be hectored and spend my day shooting down theories or having to defend myself from people who don’t really know me or my views, and whom I haven’t seen in several years and then only at cocktail parties. If only the site could have named “Acquaintences.”

So, off I go to try to figure out how to balance these things in a way that I can tolerate. Shoot me a note and I’ll give you my Twitter handle. This blog site has fallen into disuse, although that will likely change going forward. Being able to moderate comments is an under appreciated resource these days.

I’ve appreciated all the comments–well, most of them anyway–and positive reinforcement I’ve received about my Facebook posts. I’ve enjoyed finding my writing voice and where it’s led me.

Sixty-five percent of adults in the United States have a Facebook account, including my 81-year old father. He doesn’t use it much. He started it last year after I told him that his granddaughter was posting pictures of her semester in Italy there and that Facebook was the best way to keep up with her adventure (even if it meant seeing her in various states of sobriety and with foreign men with a natural attraction to American blondes).

I have only rarely used a photograph of myself as my profile picture on the site, relying on photos (and cartoons) for purely comedic and crack-myself-up purposes.

I was doing my usual computer clean-up of my dad’s computer recently and he mentioned how infrequently he visited Facebook, but that more and more of his friends are talking about its uses and value. So I logged him on and showed him around a bit, including my page.

Him: “That’s your name, but that’s not your picture.”

Me: “There’s no requirement that you use your own photo.” 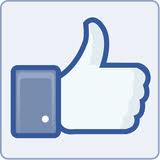 As we’ve talked with our kids about the dangers of posting of pictures to Facebook (as evidenced here), I’ve been thinking about how kids experience the intimacy of friendship in the web-based world.  My preliminary conclusion is that while they think they’re more connected to people, what they really have is the illusion of closeness rather than the real thing.

Six years ago or so (pre-Facebook–which feels like saying “pre-historic”), I went back to my basketball crazy college with a client to watch a game with a big rival.  It was a Tuesday night early in the season.  The home team won, an outcome was then a foregone conclusion, but not any longer.  It was an exciting game, with a capacity crowd roaring at fighter jet-decibel levels.  We left the arena and headed straight for the prime watering hole, expecting a similarly raucous crowd.  And…crickets.  “Where is everybody?” I finally asked the waitress.

“In their rooms chatting with each other on the computer,” she responded.

Fast forward to today’s Facebook, Twitter, text, web camera-enabled world.  My high school-aged daughter was studying for finals and told us that she was meeting with a friend to work on French.  I never heard anyone come in, and was sure she hadn’t left, so I walked in her room to see that she was video chatting with her French classmate.  The quality of the video was decent, but ultimately it was like a bad conference call with each of them talking over each other and having to repeat themselves and talk loudly–things that would never have happened had they been in the same room.  It looked like more trouble than it was worth and definitely wasn’t adding to the academic environment.  “Why couldn’t you two get together to study?” I asked.

“Because we have the video chat, Dad (read: ‘you moron’)”, my daughter replied.

Facebook has rendered the word “friend” meaningless in the same way certain other words have been neutered.  A friend of mine told me of a conversation with his high-schooler in which the kid said, “We’re ‘friends’, but we’re not friends.”

This technological interaction problem (hereafter referred to as “TIP”; I expect all royalties and credit for having coined same) isn’t limited to kids, of course.  Ever been behind someone in the line at the grocery store who treats real people with the same snarky sarcasm normally found in the comment sections of websites and blogs?  It’s almost like being in a foreign country and witnessing someone providing a living example of the phrase “Ugly American”.  These folks seem to either have forgotten or never learned society’s rules for interacting with others.  Yes, I know being rude is not limited to those raised in the digital age (those intent on making that point should get their own blogs) but doesn’t it seem like these non-social or anti-social creatures are more prevelant than they’ve ever been?

So we now live in a world in which every random thought is broadcast to the world, every picture available for everyone to see, everyone is linked together, but no one knows anyone all that well.  I get the sense that we may be advancing technologically, but we’re moving backwards socially.  Turn it off.  Unplug.  Get outside.  Meet people face-to-face. Use your vocal chords and not your fingertips.  Become friends.