Oh The Places They Go

In the days before social media, the sharing of travel stories with those who’d appreciate the absurdity meant sending emails. They were typically filled with the kinds of things you’d expect (and now see all over Facebook, Twitter, and Instagram); problem passengers, annoying seat recliners, double-belters, drunks, delays, etc. Every once in a while there would be a celebrity sighting. Over time, the mundane parts of travel were skipped over, in favor of the notables met while on the road. After a while though, another evolution occurred. The focus became celebrities or notables encountered in the bathroom and whether or not they’d washed their hands before leaving. The emails were titled “Today in Celebrity Hand-washing” or something (more) clever.

I was able to contribute a few sightings to the group. I once saw Chris Farley inhale a Big Mac in the time it took me to put my bag in the overhead. I once had then-Congressman Rahm Emanuel a couple of rows ahead of me. I tried to catch him for the sole purpose of having him tell me to “F(*& off,” and flip that chopped off middle finger at me. He was famous for being oh-so willing to do so, and I wanted to join that (non)exclusive club. Alas, he was too fast for me.

I sat next to U.S. Senator from Colorado Ben Nighthorse Campbell on a flight to Denver. Being a close follower of politics, I knew Senator Campbell had recently switched parties, but I couldn’t remember in which direction. He was traveling without staff and was willing to talk to me, so I structured my questions so that his answers would help reveal whether he was now a Republican or a Democrat without me having to embarrass myself and ask him.

By the time we landed, I knew something that few others did, that Senator Ben wasn’t going to run for re-election in 2004. Since social media hadn’t been invented yet, spreading that around would have been a challenge, so his secret was safe with me.

There were two incidents I think about often, one very troubling and one inspiring. On a flight into Westchester County, I found that then-Knicks head coach Jeff Van Gundy was sitting a row in front of me (he in the last row of first class, me in my favorite bulkhead aisle seat). 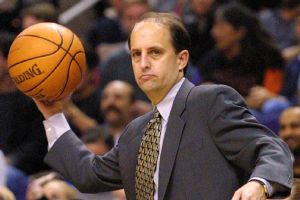 Somebody sanitize that ball!

Wearing his Nazareth College sweatshirt, he walked off the plane about three people ahead of me and headed directly into the very tiny men’s room just outside the gate area. Though it was crowded, the need to fill in my travel buddies with an installment of “Today in Celebrity Hand-washing” meant that I monitored his use of the sink. From that day to this, every time I see Van Gundy on television shaking hands congratulating another coach or a player, I think of him exiting that bathroom in 2001 without a stop at the sink.

But the money story happened in late 2005/early 2006. I was in New York, trying to fly home on a Friday night through La Guardia. My flight had been cancelled and I was struggling for options. I finally found a seat in first class on a United flight. I don’t usually pay to ride up front, but the extra $100 seemed like a better deal than a Friday night in a Manhattan hotel room and a Saturday flight home.

I boarded late so most everyone else was already onboard and seated. I stowed my gear and settled into my aisle seat. Across the aisle, I saw then-U.S. Senator Barack Obama was sitting there. Having won one of the most interesting and bizarre senate races I’d ever seen, and coming off of his national launching pad with his keynote at the 2004 Democratic National Convention in Boston, he was well-known to me. There’s was already talk that he was the rising star of the party and might run for President one day.

I’m old-fashioned and think that those in public service deserve not only our respect but our gratitude. When the flight attendant came by to take our drink/meal order and butchered the Senator’s name (not the first time, I’m sure), I made a point of telling him that the name of the United States Senator sitting in row 4 was pronounced “oh-BOMBa.” I don’t talk on airplanes (I’m not proud to say that I’ve feigned deafness to avoid conversation with an over-served elderly woman), so I left the Senator alone. He and I each plowed through our piles of magazines in peace until we arrived at O’Hare and stood up in the aisle. As he put his suit jacket on I noticed that his lapel was upturned in the back. I pounced. “Let me get that for you,” I said. “We can’t have the next President of the United States walking off this plane looking like that.”

“Thanks,” he said. “My wife usually takes care of that for me.”

We chatted a bit as we waited to deplane. While talking, I began dialing my cellphone like a mad man, hoping to get my wife on the line and hand the phone to the Senator so she could speak to him. In retrospect, I should have handed him the phone to leave her a message, but at that point, things were going well and happening quickly, so I wasn’t thinking quite as clearly as I would later when I regretting not giving him the phone. As we walked up the jetway, I wished him well and peeled off to call the office and get my ride home. The next stop for me was the men’s room, where I encountered Senator Obama in the nearly empty room. Keeping appropriate distance from where he was standing, he noticed my presence and re-engaged. We talked for a moment about something I’d seen in the New York Times and he gave an appropriately pithy response as he moved toward the sink and proceeded to thoroughly…wash…his…hands. Whew! Thank goodness. I wouldn’t have been able to get over it if that had gone the other way. I couldn’t imagine an elected official, someone whose job description includes meeting and greeting constituents, most often with a handshake not taking care to wash up.

You may have noticed that all the stories above are a bit dated. You may wonder why I’ve taken so much of your time tonight reliving these stories. Aside from the Administration I correctly foresaw two years ahead of time is now only days away from ending, the flashbacks were driven by something very tangible today. The item nearby crossed my Twitter feed earlier today. 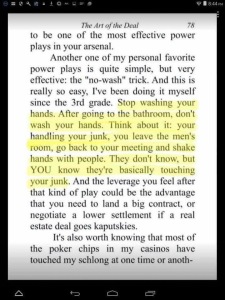 Excerpt from “The Art of the Deal” by Donald J. Trump

In it, the man less than 100 hours away from becoming the 45th President of the United States brings forth his inner 9-year old, by sharing that he trolls his marks by not washing his hands. How nice. How, as he would say, “classy.”

But as the other nearby picture would show, there seems to be a bit of a problem. It looks like those dirty hands are occasionally used for purposes other than shaking the hands of people over whom Don wants to assert his dominance.

And now all I’ll think about when I see him put his left hand on the bible and raise his right hand to God as he takes this nation’s most sacred oath is that he’s likely not washed his hands. Congratulations, Mr. President-elect. We are off to a great start.

This entry was posted on Tuesday, January 17th, 2017 at 12:05 AM and is filed under Uncategorized. You can follow any responses to this entry through the RSS 2.0 feed. You can leave a response, or trackback from your own site.

One Response to Oh The Places They Go