Back Home Again, in Indiana

As a freshman at Indiana, my first real college basketball game was the IU vs. Kentucky game on December 6, 1980.  Kentucky, then ranked #2 came into town to play the #5 Hoosiers and I had a seat in the 10th row on the floor behind the basket.  For those that have never been in Assembly Hall in Bloomington, it is one of the worst places to watch a college basketball game (or attend a concert).  It is built with two monster sections on either side of the court, with a very steep balcony on top.  There are only about 20 rows of bleachers behind each basket.

Back then, there was no such thing as a student section–we were randomly placed around the arena.  In those days, you could sign up for only half of the home games.  You had to negotiate with someone (usually a female student) to get the other half of the games.  With the random placement and the chance that you were going to end up either high in the main level or in the balcony that the same view as a satellite in geo-synchronous orbit, those floor level seats were sacred and coveted.

It was loud and it was thrilling.  Indiana ended up losing 68-66. Ray Tolbert missed a dunk in the last minute that would have given Indiana the lead that was right in front of us.  Needless to say, I was hooked.  In my four years at Indiana, the only home games I missed were those that occurred when we were on break.  I skipped spring break my freshman year to attend the NCAA regionals being held in Bloomington.  We ended up winning the national championship that year, and the stories about that season and that night are still being told thirty years later.

This is all a long lead-up to the flashbacks I’ve had since late Saturday afternoon, when Indiana’s basketball program returned from the dead to beat the (then) #1 ranked Kentucky Wildcats.

Watching the game was a treat and featured me pacing and jumping and agonizing over what seemed like an opportunity lost.  And then Christian Watford took a pass and drained a twenty-six foot jump shot that people will be talking about in Bloomington for years to come. 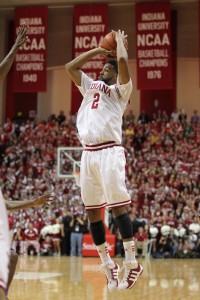 Indiana’s basketball program was good in my day.  We expected to win our home games, even against people ranked higher than we were.  As a result, we never stormed the court.  It was fun to watch the kids take the court yesterday. The end of the game and the aftermath were jubilant.  Here are several views.  The first with longtime Hoosier Radio Network announcer Don Fisher’s call dubbed over the ESPN video.

This one is my favorite.  It’s amateur video taken from about 20 rows up in the main level, so it lacks the announcers, but gives you a great idea of the explosion of sound as the game ended.

Finally, my favorite watering hole while on campus (and now) was Nick’s English Hut.  When Indiana beat Michael Jordan’s North Carolina team in 1984 to advance to the regional finals when I was a senior, I was standing on the table and hanging from the beer barrels that hung from the rafters.  So it’s a place with wonderful memories for me.  Here’s a video taken from within the “addition” in Nick’s–not the old staid part but the part that looks like a sports bar without seating.  The video shakes and moves so quickly that the neon signs look like fabulous modern art works.

This entry was posted on Sunday, December 11th, 2011 at 9:24 PM and is filed under Uncategorized. You can follow any responses to this entry through the RSS 2.0 feed. You can leave a response, or trackback from your own site.