During the winter months, it is common for people from non-snow environments to taunt their northern brethren with smart-ass comments like “It we may get thunderstorms but you don’t have to shovel rain.”

In the immortal words of John Kennedy:  “Let them come to my back yard” where two pumps are moving the accumulated 6″ of water at a combined rate of 3,000 gallons per hour. 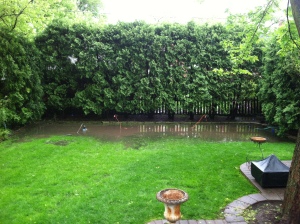 I’m now told that President Kennedy didn’t invite the Germans to his back yard, but to Berlin.  Which seems odd, because Kennedy wasn’t from Berlin and it’s rude to invite people over to someone else’s house without their permission. You would have thought that he would have had better manners than that.

Whatever.  My back yard is still flooded.

This morning, I participated in my second “Bike the Drive“, an annual event in which they close Lake Shore Drive to autos from 5:30AM until 9:30AM and allow anyone willing to pay $45 to ride on the road.  Last year was a great ride.  A beautiful day matched my then-new enthusiasm for riding and I breezed through 45 miles and could have gone further.  This year, there was a dense fog warning and the temperature was 55 degrees.  Driving to Grant Park, visibility was less than a half-mile.  It was very disconcerting because I honestly had no sense of where I was.  The lack of visible landmarks left me feeling lost on a road I’ve driven thousands of times.

Once on my bike, the fog thickened with every half block I got closer to the lake, and a light mist was in the air.  On the southbound leg, the fog was so thick that it was difficult to see McCormick Place–one of the largest buildings in the world–until you were right on top of it.  The northbound leg was into a nice cool breeze.

So let me summarize:  Out the door at 5:15am, on my bike at 5:45.  Fifty-five degrees.  Fog. Mist.  Into the wind on the uphill part of the ride, in addition to my self-generated 15-18 mph wind from my mediocre pedaling.  The moisture in the air meant that riding was not only more difficult but more dangerous.  There were a couple of times when I hit my breaks and nothing happened.  I didn’t see any accidents (last year I passed about five accidents, all involving speed differential between casual riders and racers, and one in which a mid-50’s rider had a heart attack and died on the course).  Mercifully, I didn’t see any of that this time.

My initial goal was to do two complete loops of the course or 60 miles.  My lack of pre-BTD training due to Chicago’s fantastic spring weather, combined with a very long walk on the golf course yesterday in bog-like conditions and today’s wonderful weather left me grateful to exit the course after one loop.  Thirty miles.  I was gassed before I started.  Even a good playlist on my iPod couldn’t pull me through.

Besides, I had to hurry home to begin building my Ark.

This entry was posted on Sunday, May 29th, 2011 at 4:30 PM and is filed under Uncategorized. You can follow any responses to this entry through the RSS 2.0 feed. You can leave a response, or trackback from your own site.