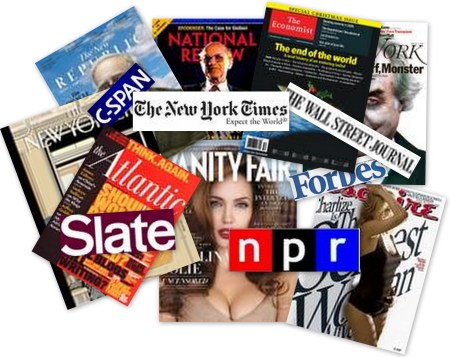 Probably Enough to Keep Me Busy

My name is Mark and I am an addict.  My drug of choice is information, particularly on current events.

I started really reading in junior high, but it got out of hand in high school.  At first it was two newspapers a day (Chicago Tribune and the Arlington Herald).  Sports first, then the other stuff.  My reading an article about a rape trial got me “the talk” from my dad. I was in Student Congress in high school and there wasn’t a current topic that was off-limits, so preparing meant covering a wide landscape.  The guy behind the periodical desk at the library came to dislike me.  That experience introduced me to the New York Times, Washington Post and Wall Street Journal, as well as a broader range of general and not so general interest magazines.  Foreign Policy, anyone?  It was a gateway drug.

I went into remission in college, then resumed consuming thereafter.  It’s now really out of hand with both internet’s accessibility and my not having a job.  But even when I worked, I still always had about 40 pages of articles I’d reformatted into two-column, 10-point font to carry with me.  Walking to a meeting, waiting for a lunch partner, lunching by myself, on the train, and in other places appropriate or not, my appetite for news could be described as insatiable.  In the last couple years, I’ve fallen in love with podcasting, so now I’ve got news in through my ears and eyes, often at the same time.  If you see me with my headphones, chances are good that I’m tuned into Fresh Air or something similar, rather than Green Day.

I don’t watch much TV; mostly sports and a few entertainment shows (Modern Family tops the list, Wednesdays at 9/8CT).  I only occasionally watch cable news, and that’s only because I like the way certain people write their material, not because it adds much to my knowledge or understanding of a topic.  Cable TV does all of us a disservice by conflating the ideas of “governing” and “politics” and treating both in the same way CNBC treats the stock market or ESPN treats the baseball season.  It’s not a game.  Policy-making, like history, happens over a long arc of time and does not change eight times within 24 hours. I couldn’t help but notice how the so-called conventional wisdom on President Obama turned 180 degrees in the moments following signing the health care bill (and publication of David Frum’s “Waterloo” analysis). One moment, he’s a political blunderer, the next a genius.  It was never either one and there wasn’t a switch magically flipped on Sunday.  While there are addition points made in this this NY Review of Books piece, it encapsulates my feelings on the topic pretty well.

I used to have a business relationship with CNN and conversations with their executives taught me much about how they think and their need to “feed the monster”.  Essentially, their argument was:  We’re on for 24 hours and have to have something to talk about, so we take small things, small differences, highlight them and if we’re lucky, we’ll get a run of a couple days out of a story.  If that happens, it’s that many fewer other little stories that we’ll have to report. It was akin to taking crap and throwing it against the wall to see what would stick, then talking about it until it fell off the wall.  It works great at first (e.g., the first Gulf War), but with the proliferation of channels, the hosts of these shows have to continually come up with unique things to be outraged about, lest they lose their gigs (think Beck and Olbermann; Hannity and Ed).  If there’s nothing to be outraged about, what’s the point of having them on the air?  So outraged they are.  And we lose the concept of rational discourse in the process.

So, I read.  Don’t tell my business colleagues, but reading about business bores me.

I occasionally get asked what I read.  Unlike someone who came to national prominence in the last couple years and was unprepared for that question, I have an answer.  It’s a long one.  I’m exhausted looking at it.  You’ll note that it doesn’t include Time, Newsweek or any of the other “general interest” magazines.  My sense has been that if they’re only going to publish weekly, their analysis had better be excellent because it comes so late; I find their websites generally uninteresting, too (too much celebrity coverage).  The last time I checked, I didn’t think it warranted the effort.

It’s a habit I can’t kick.  I read the occasional book, but while doing that, I’m thinking of the other current things I could be reading about, so it sort of sucks the pleasure out of it.  The only exception is when I get my hands on a good history book, since I can put myself in the historical context and read it as if it was a current event.  It’s more confusing to explain than to do.

Online – consistently (I pay for access to the WSJ.  I would pay for content at other providers, too.  The notion that this stuff all has to be free is flawed as far as I’m concerned):

If I’m missing something, let me know.  There’s always room on the browser and in the stack of papers for another view.

This entry was posted on Sunday, March 28th, 2010 at 5:03 PM and is filed under Uncategorized. You can follow any responses to this entry through the RSS 2.0 feed. You can leave a response, or trackback from your own site.

2 Responses to What I read