Courtesy of Eurostat and Bloomberg comes this chart correlating the current credit default swap spread for certain sovereign debt with the percentage of that particular country’s male population between the ages of 25 and 34 that lives with their parents. 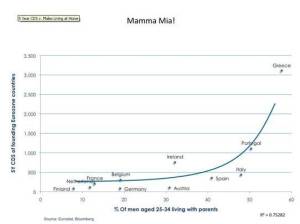 Initially, I struggled a little bit with how instructive this chart really is, wondering if there were other explanations for the high rate of mamma’s boys out there. For example, I think that it’s fair to say that the countries with the highest percentage of men at home is that they have strong familial traditions and it might not be unusual to have extended families living together. However, a recent visit with an authentic Greek friend of mine (first generation American with a home and regular travel back to the home country) indicates that the high number of home boys isn’t simply familial roots. Large numbers of Greeks are leaving their homes in the cities and returning to their more suburban or rural roots to ride out the economic troubles with their families. “There’s nothing left for them in the cities,” she said. Not to mention the brain drain that’s underway in these countries in which those that can find employment in other places are doing it and abandoning Greece altogether. The implications of these trends by themselves point to a generation of difficulties ahead for these countries, even if these were their only problems.

This entry was posted on Wednesday, February 15th, 2012 at 10:46 PM and is filed under Uncategorized. You can follow any responses to this entry through the RSS 2.0 feed. You can leave a response, or trackback from your own site.