Californians Face Consequences of Their Actions

California is a dreamland for many people. It’s got everything: oceans and beautiful beaches within driving distances of towering mountains, a beautiful climate and beautiful people. Beautiful and righteous and self-assured and confident people.

Indeed, it is a land full of dreamers. Economic dreamers, with a really screwed up method of passing laws via a popular voting scheme known as propositions. Nowhere does the residential real estate market boom and bust with as much severity as it does in California. And nowhere has the concept of the economic free lunch gotten a bigger and more exhaustive workout. Passed in 1978, Proposition 13 limited the growth of property taxes and heralded the coming of age of the anti-tax movement and presaged the rise to power of Reagan and the conservatives. The basis of the proposition was to force a shrinkage of government by starving it of revenue, but while Californians have been quite good at cutting their own taxes, they have been dismal at cutting spending.

The Economist recently devoted a special section to the budget troubles that California’s penchant for cutting taxes and not reducing spending has caused. They do a better and more thorough job of the origins of the current budget crisis than I ever could.

The budget crisis triggered by Prop 13 and the lack of any fiscal discipline is only part of the picture.

About twenty years ago, rock-ribbed conservatives and “tough on crime” types thought that liberal judges were being too lenient on repeat offenders. It was thought that taking the optionality out of sentencing would fix the problem and get criminals off the streets. The wave of “three strikes and you’re out” laws that swept the nation in the early 1990’s hit California in 1994. Fueled by outrage over the murder of 12-year old Polly Klaas by a violent criminal out on parole, Proposition 184 passed in a 72% landslide.  The law stipulated that a third felony conviction would result in effective life imprisonment if the first two felonies were deemed to be either violent or serious.  The public was sold on it as a way to keep career criminals who rape women, molest children and commit murder behind bars where they belong. Emily Bazelon’s 2010 article for the New York Times Magazine provides evidence that the law was written much more broadly than advertised.  One of a man with two convictions was sentenced to life in prison for stealing about a dollar in change from inside a car.

The law was amended once to permit offenders involved in drug offenses to get treatment and not life in prison and once to cut the punishment for non-violent offenders to “only” 25-years. According to some, the law has had bizarre consequences. Two-time offenders about to be caught occasionally aggressively resist arrest and risking the lives of police officers and innocent bystanders to avoid capture. Two-time offenders apparently request parole out-of-state to reduce the likelihood of committing a third crime in California and thereby export potential future crimes to other states. 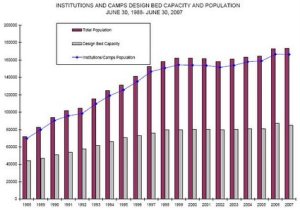 Largely as a result of not being able to release non-violent offenders under the Three Strikes law, California prisons now hold over 140,000 inmates (down from 160,000 a couple of years ago) in a system built to handle 80,000. The general estimate is that it costs the California about $50,000 per year to hold and care for each prisoner. So…the costs adds up.

Until as late as last week, it was possible that the ordinary Californian did not view the combination of Prop 13 and Prop 184 as necessarily conflicting. Taxes remained at below-market levels (that is, below the level that, given desired spending would balance the state’s budget–more on this below). Three-time criminals were taken off the streets for long periods, effectively eliminating the risk to the population.

Enter Justice Anthony Kennedy and his four compadres on the Supreme Court, who last week ruled that the conditions in the wildly overcrowded state prisons constituted “cruel and unusual” punishment.  In short, Justice Kennedy’s opinion mandated unspecified changes but suggested a range of possibilities, including releasing up to 40,000 prisoners.

The symmetry is both appalling and beautiful.

Of course, the legislature could reallocate funds from other programs to build more prisons to reduce overcrowding and improve conditions, but in a state in which more money is already spent on prisoners than on education, the unpopularity of such an idea is manifest. It surprises no one that California taxpayers would rather have the limited resources of the state spent on them instead of the people they decided should be wards of the state in the penitentiaries.  In short, this is another story of promises made that cannot afford to be kept, of the gutlessness of legislators to find the political courage to make hard and unpopular decisions.

The voters of California put themselves in an irreconcilable position–low taxes and a booming, unmanageable prison population.  Something had to give.   The sad fact is that while this particular problem is limited to California, it represents a precursor to similar problems in every state and municipality in the country.  It is our future, too.

This entry was posted on Wednesday, June 8th, 2011 at 10:25 PM and is filed under Uncategorized. You can follow any responses to this entry through the RSS 2.0 feed. You can leave a response, or trackback from your own site.